FREE UK Standard Delivery when you spend £60 or more 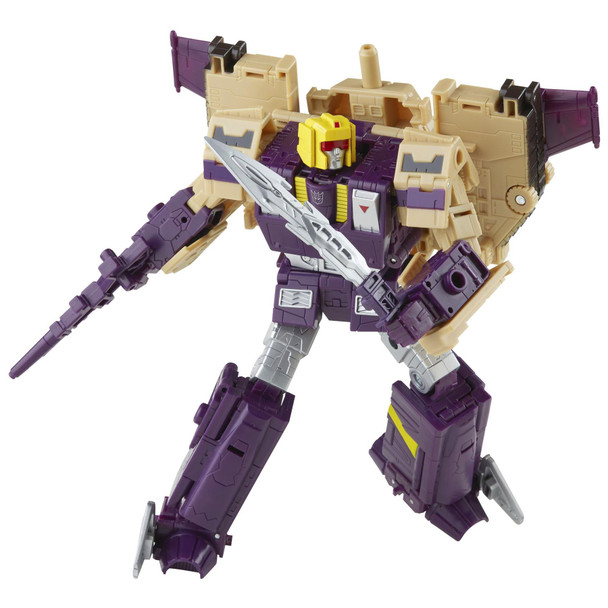 Harness the power of Energon with the Transformers Legacy Series Leader Blitzwing Triple Changer robot toy! Blitzwing terrorizes his opponents by switching between his three modes in battle, laughing all the while.

Includes: figure, 3 accessories, and instructions.
Warning: Choking Hazard - Small parts may be generated. Not for children under 3 years.
Images from the manufacturer are used in this listing. Colours and decorations may vary.
© 2022 Hasbro. All Rights Reserved. Manufactured under license from TOMY Company, Ltd.

RRP:
Now: £26.99
Was:
Construct! Customise! Convert!The Transformers Construct-Bots Triple Changers come in pieces, and it's up to you to build them in one of their 3 modes! Use the 67 piec

RRP:
Now: £52.99
Was:
Harness the power of Energon with the Transformers: Legacy Leader Galvatron robot toy! Galvatron is cold-hearted, compassionless, and will go to any lengths to showcase his power. Universes continue...

RRP:
Now: £171.99
Was:
Fans can take their Transformers figure collections to the next level with Generations Selects, a fan-dedicated line of figures featuring fan-favourite, special edition characters you can't find in...

RRP:
Now: £44.99
Was:
Fans can take their Transformers figure collections to the next level with Generations Selects, a fan-dedicated line of figures featuring fan-favourite, special edition characters you can't find in...

RRP:
Now: £99.99
Was:
Harness the power of Energon with the Transformers Legacy Series Commander Decepticon Motormaster robot toy! Motormaster wants to be known as "King of the Road" and will run down anyone sharing his...

RRP:
Now: £55.99
Was:
Studio Series has always allowed fans to reach past the big screen and build the ultimate Transformers collection inspired by iconic movie scenes from the Transformers movie universe. Now, the Studio...

RRP:
Now: £23.99
Was:
Harness the power of Energon with the Transformers: Legacy Deluxe Decepticon Dragstrip robot toy! To Dragstrip, winning is everything. He would rather be scrapped than lose. Universes continue to...

RRP:
Now: £29.99
Was:
That's no moon... It's the ultimate threat to the Rebels. Let the epic Star Wars battle begin. Darth Vader and his menacing Stormtroopers are ready for an intergalactic battle, Angry Birds style!...

RRP:
Now: £17.99
Was:
This 2-Pack includes a Bumblebee figure inspired by the original G1 toy design, released in our new 3.5-inch Core Class scale, and a Spike Witwicky mini figure in his exosuit. Bumblebee figure...

RRP:
Now: £25.99
Was:
Beastify the battlefield! Worlds collide when the Maximals and Predacons join the fight, coming together with the Autobots and Decepticons in an epic battle that will alter their destiny forever...

RRP:
Now: £9.99
Was: £14.99
Not long ago, a glowing mist of Energon came down from the sky and covered a shopping mall. The things inside came to life as little Transformers robots! These bots can hide in plain sight as...

RRP:
Now: £21.99
Was:
Count Dooku was a menacing Sith Lord and central figure in the Clone Wars. Once a Jedi, he became disillusioned with the Jedi Order and thirsted for greater power. This 6-inch-scale Count Dooku...