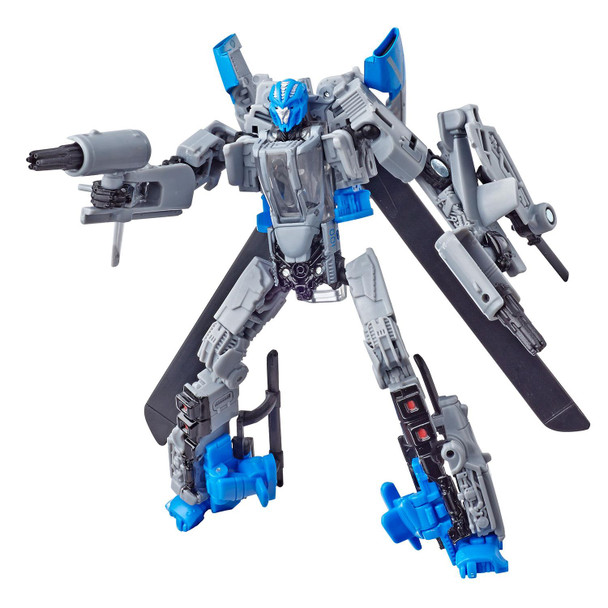 Ruthless Decepticon Bounty Hunter: In the Autobot Pursuit scene from Transformers: Bumblebee, Dropkick detects the signal of a high-level Autobot criminal. Eager to come faceplate to faceplate with his prey, the ruthless Decepticon comes to Earth, closing in on his target.

Intricate Conversion and Movie-Inspired Accessories: This Studio Series #22 Deluxe Class Transformers: Bumblebee Dropkick figure brings the movie action from the Autobot Pursuit scene to new dimensions. The figure converts between robot and Bell Helicopter modes in 24 steps and comes with 2 detailed accessories inspired by the movie. Remove the backdrop included in pack to showcase Dropkick in the Autobot Pursuit scene.

Recommended for ages 8 and up.

RRP:
Now: £7.99
Was:
Picture new galactic maneuvers and brace for mega lightspeed action with this 3.75-inch Kylo Ren figure from Star Wars: The Force Awakens! Command the First Order and search out the Resistance with...

RRP:
Now: £18.00
Was: £20.99
In the Dreads Standoff scene from Transformers: Dark of the Moon, Crankcase takes on the Autobots, refusing to back down. Intricate Conversion and Movie-Inspired Accessories: This Studio Series 30...

RRP:
Now: £29.99
Was: £44.99
The legend of Ultra Magnus is exceeded only by the legend of Optimus Prime. When Ultra Magnus was lost, the forces of justice would not let a warrior of his caliber fall. Minimus Ambus, using the...

RRP:
Now: £29.99
Was:
The explosive Transformers saga continues with Transformers: The Last Knight, where powerful forces rewrite legend. With the fate of Earth at stake, new heroes must rise in an epic struggle to forge...

RRP:
Now: £89.99
Was: £143.99
The legendary battle between the Autobots and Decepticons descends to Earth in the explosive Transformers live action movies. As Optimus Prime leads the fight for freedom with powerful Autobot...

RRP:
Now: £24.99
Was: £44.99
Turn the dial to the freshest '80s style with this exclusive Bumblebee Greatest Hits figure. Grab an air guitar, strike a power pose, and celebrate a totally tubular time of bodacious bots and music...