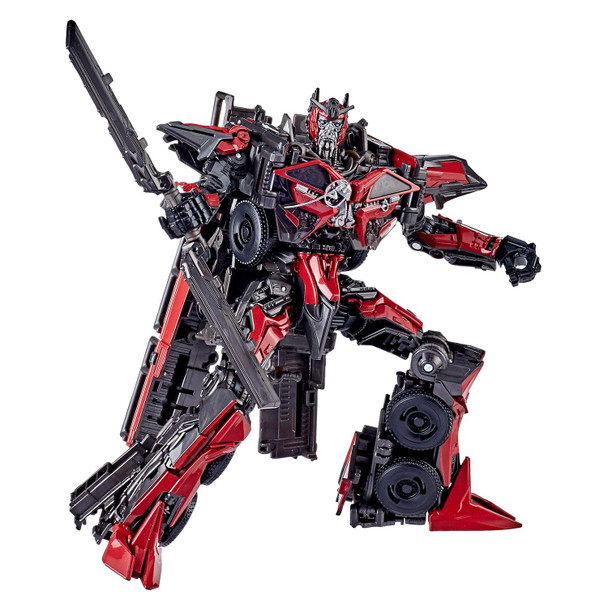 In the Battle of Chicago scene from Transformers: Dark of the Moon, Sentinel Prime squares off against Optimus Prime in a fight to save their homeland of Cybertron, but at great cost. For Cybertron to survive, it must enter Earth’s atmosphere through a space bridge and drain it of its natural resources. Seeing victory slip away, Sentinel Prime calls for reinforcement from nearby Decepticon ships to delay Optimus Prime long enough for the space bridge to be opened.

Recommended for ages 8 and up.

Stock images from the manufacturer are used in this listing. Colours and decorations may vary.
Warning: Choking Hazard - Small parts may be generated. Not for children under 3 years.
© 2020 Hasbro. All Rights Reserved.
Manufactured under license from TOMY Company, Ltd.
© 2020 Paramount Pictures Corporation. All Rights Reserved.

RRP:
Now: £29.99
Was: £32.99
In the Chicago Aerial Offensive scene inspired by Transformers: Dark of the Moon, Thundercracker tears through the skies over Chicago. As explosions shake the air around him, Thundercracker rains...

RRP:
Now: £54.99
Was:
In the Battle of Chicago scene from Transformers: Dark of the Moon, Shockwave and his Driller launch an all-out assault on the city. Desperate to stop him, brave paratroopers risk everything in a...

RRP:
Now: £54.99
Was:
In the Pyramid Desert Battle scene from Transformers: Revenge of the Fallen, Scavenger and his Constructicon comrades rumble in from all directions and surround Leo Spitz, Seymour Simmons, Skids, and...

RRP:
Now: £24.99
Was:
Discover Earthrise: The siege is over, but the War for Cybertron has just begun. The Autobots and Decepticons have left Cybertron, but their battle rages on as they speed through space in pursuit of...

RRP:
Now: £19.99
Was:
The time of peace is gone. Cybertron is a war-torn battlefield, overrun by the fighting between two factions: the Decepticon resistance army and the Autobot counter-resistance fighters. Soldiers on...

RRP:
Now: £15.00
Was: £21.99
In the WWII Flashback scene from Transformers: The Last Knight, a combat-ready Bumblebee fights alongside soldiers as a powerful ally, unleashing war machine force on an enemy stronghold. The #26...

RRP:
Now: £29.99
Was:
The explosive Transformers saga continues with Transformers: The Last Knight, where powerful forces rewrite legend. With the fate of Earth at stake, new heroes must rise in an epic struggle to forge...

RRP:
Now: £32.99
Was:
In the Pyramid Desert Battle scene from Transformers: Revenge of the Fallen, Constructicon Scrapper and his Constructicon comrades rumble in from all directions and surround Leo Spitz, Seymour...

RRP:
Now: £20.99
Was:
In the WWII Flashback scene from Transformers: The Last Knight, Hot Rod and Bumblebee are part of an elite special forces group launching a surprise attack on an enemy stronghold. The two Autobots...

RRP:
Now: £18.00
Was: £20.99
In the Dreads Standoff scene from Transformers: Dark of the Moon, Crankcase takes on the Autobots, refusing to back down. Intricate Conversion and Movie-Inspired Accessories: This Studio Series 30...